euronews.com
Ukraine war: Putin to meet soldiers' mothers; Kherson strike; and half of Kyiv without power
25.11 - 15:15

Early on Sunday morning negotiators managed to agree on what's called a loss and damage fund.It will compensate poor countries that suffer from extreme weather events such as droughts, floods and heatwaves that have been made worse by the carbon emissions of rich countries.It's a deserved win for climate justice which will benefit countries that have contributed little to the pollution that heats up the globe but who suffer the most.But a larger and arguably more important agreement over going further in reducing emissions proved too much at this climate summit.After the decision on the fund was approved, talks were put on hold for 30 minutes so delegates could read texts of other measures they were to vote on.“This is how a 30-year-old journey of ours has finally, we hope, found fruition today,” said Pakistan Climate Minister Sherry Rehman, who often took the lead for the world’s poorest nations.One-third of her nation was submerged this summer by a devastating flood and she and other officials used the motto: “What went on in Pakistan will not stay in Pakistan.”Outside experts hailed the decision as historic.“This loss and damage fund will be a lifeline for poor families whose houses are destroyed, farmers whose fields are ruined, and islanders forced from their ancestral homes,” said Ani Dasgupta, president of the environmental think tank World Resources Institute, minutes after the early morning approval. “This positive outcome from COP27 is an important step toward rebuilding trust with vulnerable countries.”It’s a reflection of what can be done when the poorest nations remain unified, said Alex Scott, a climate diplomacy expert at the think tank E3G.“I think this is huge to have governments coming together to

Ukraine war: Putin to meet soldiers' mothers; Kherson strike; and half of Kyiv without power euronews.com /1 week ago

COP27: EU left 'disappointed' by lack of ambition in final deal, calling it a 'small step forward' euronews.com /1 week ago

These Countries Were Hit The Hardest By the FTX Collapse – Find Out Why cryptonews.com /1 week ago
Show more
The website financemag.cash is an aggregator of news from open sources. The source is indicated at the beginning and at the end of the announcement. You can send a complaint on the news if you find it unreliable. 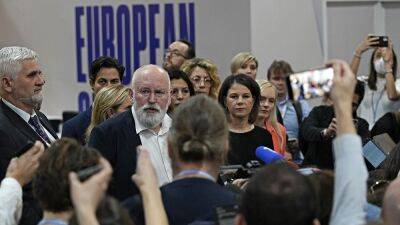