euronews.com
Russia rejects pullout from Ukraine as condition for talks
02.12 - 23:31

Ukrainian prosecutors say they have discovered four Russian "torture sites" in the southern city of Kherson.The "temporary detention centres" were discovered in four buildings that the Russian forces had allegedly used during its occupation of the city."During the capture of the city, the occupants illegally detained people and brutally tortured them," the Ukrainian prosecutor's office said on Telegram."Parts of rubber batons, a wooden bat, a device used by the Russians to torture civilians with electric shocks, an incandescent lamp, and bullets from the walls were recovered.""People in cells and basements were subjected to various methods of torture, physical and psychological violence," it added.Ukrainian forces recaptured Kherson earlier this month after Russia withdrew its forces and moved some of them to reinforce positions in the eastern Donetsk and Luhansk regions.Kyiv has repeatedly accused Moscow of committing "war crimes" and "atrocities" since its invasion on February 24.

Russia has denied the allegations.Russia has meanwhile vowed to punish those responsible for the deaths of a group of Russian soldiers in Ukraine.Videos emerged last week on Russian social media of 10 soldiers lying on the ground before a man seemingly opens fire.Moscow claims that the men were prisoners of war who had been trying to surrender to Kyiv before they were "brutally" killed. "Naturally Russia will search for those who committed this crime itself, they must be found and punished," Russian presidential spokesman Dmitry Peskov told reporters on Monday.Peskov added that Moscow would turn to international bodies for help, "if it can be useful".The UN’s Human Rights Monitoring Mission in Ukraine has also called for further

'Fewer than 10' dead after gunman opens fire at Walmart store euronews.com /1 week ago

Ukraine war: Kyiv monastery raid; Kherson evacuations; and Poland to deploy missile launchers euronews.com /1 week ago
Show more
The website financemag.cash is an aggregator of news from open sources. The source is indicated at the beginning and at the end of the announcement. You can send a complaint on the news if you find it unreliable. 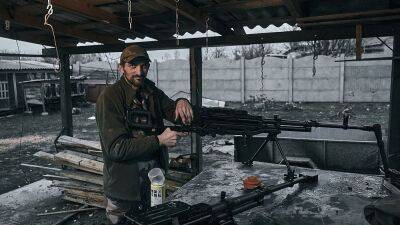