euronews.com
NATO meets to talk Ukraine at scene of one of its most controversial decisions
29.11 - 13:25

Ukraine war: Here are the key developments you need to know for Sunday

Germany has offered Warsaw the Patriot missile defence system to help it to secure its airspace, after a stray missile crashed in Poland last week, Defence Minister Christine Lambrecht told a newspaper on Sunday.The German government had already said it would offer its neighbour further help in air policing with German Eurofighters after the incident, which initially raised fears that the war in Ukraine could spill across the border."We have offered Poland support in securing airspace -- with our Eurofighters and with Patriot air defence systems," Lambrecht told the Rheinische Post and General Anzeiger.The missile that hit Poland last week, killing two people, appeared to have been fired by Ukraine's air defences rather than a Russian strike, NATO chief Jens Stoltenberg has said.Ground-based air defence systems such as Raytheon's Patriot are built to intercept incoming missiles.NATO has moved to strengthen air defences in eastern Europe since Russia's invasion of Ukraine in February.

More than a dozen NATO allies led by Germany in October kicked off an initiative to jointly procure air defence systems for several layers of threats, including Patriot.Germany had 36 Patriot units when it was NATO's frontline state during the Cold War.

German forces currently have 12 Patriot units, two of which are deployed to Slovakia.Ukraine says it will investigate video footage circulated on Russian social media which Moscow alleged shows that Ukrainian forces killed Russian troops who may have been trying to surrender, after one of the men seemingly refused to lay down his weapon and opened fire.“Of course Ukrainian authorities will investigate this video," Olha Stefanishyna, Ukraine's deputy prime minister overseeing the country’s

Ukraine war: Putin to meet soldiers' mothers; Kherson strike; and half of Kyiv without power euronews.com /1 week ago

Ukraine war: Power cuts in Lviv and Moldova after fresh missile strikes euronews.com /1 week ago
Show more
The website financemag.cash is an aggregator of news from open sources. The source is indicated at the beginning and at the end of the announcement. You can send a complaint on the news if you find it unreliable. 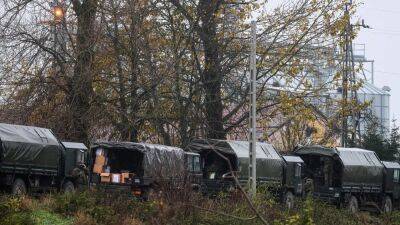 Ukraine war: Kyiv and allies differ on cause of Poland blast but agree Russia responsible

Poland blast: What do we know about the missile explosion near the Ukrainian border?